What Brighton lacks is offensive ability, but the team's defensive ability is outstanding, and it has strong scoring ability at home. Aston Villa is the team with the second worst defense in the league. It lost 20 goals in 11 rounds of away games and lacked away firepower. Therefore, it is difficult to see the possibility of them taking all three points in the fundamentals. Dayton can be unbeaten at home, the first win is preferred, and the second draw is a draw.

Manchester City's current injury problems have been alleviated, the team's offensive performance is outstanding, Aguero won a hat-trick in the last round, Mahrez scored 2 goals, Jessus also scored a goal, Guardiola's team rejuvenated Ray, the points have risen to second in the league, but there is still a big gap from Liverpool. Crystal Palace has a good defensive performance, but it is not invulnerable. It is almost impossible to burst against Manchester City. The main victory in this game should not be doubted. We support Manchester City to win.

Norwich's defense is really poor, losing 45 goals in 22 rounds, the team with the most goals in the league. In the last round of the game against Manchester United, Norwich was beaten passively, and there was no fight back, especially in the absence of the main striker Puke. Bournemouth also has many problems this season. The team lacks the desire to fight and the game is not passionate enough. This game draw is preferred and we don't think either side has the ability to win the game. If this game is to be won or lost, we will be more serious about Norwich's home advantage.

Southampton has made extraordinary achievements recently. After losing to West Ham United, they achieved an unbeaten record of 4 wins and 1 draw, and they performed well on the defensive end. Danny Ince is in a good competitive state. He has scored 14 goals this season and is a sharp knife for Southampton to attack the city. The Wolves have recently fallen into a downturn, losing to Liverpool and Watford. The last draw of Newcastle United, the team's defense has problems, which will definitely provide Danny Ince the opportunity, but the Wolves' scoring abilities Southampton is poor, we think that both sides will score goals, the possibility of a draw is high, in addition, we more recognize the home team's home advantage.

I have to say that West Ham United has improved after Moyes took office. The team's last round of Sheffield United's goals were blown out. Unfortunately, they did not get 1 point, but the team's offensive performance was really good. Now Moyes's heavy duty is to improve the team's defensive ability. Opponent Everton has a good offensive ability. Richardson is in a good shape. He scored a winning goal in the last round. Everton is Richardson this season. The price was set at 100 million pounds in order to retain this core player. Ancelotti's heavy task is also to improve the stability of the team's defense, but the impact of this game on West Ham's injury, we think Everton has a little advantage, at least can maintain an undefeated in this game result. The tie is preferred, and the second pick wins.

Newcastle's last draw with the Wolves has been very difficult. The team originally had limited offensive power and is currently suffering from injuries. The situation is indeed more difficult. Chelsea's 3-0 victory over Burnley in the previous round was easy to win, but Newcastle United is a more defensive team at home. Lampard's team must take a good three points from Newcastle United Work hard. However, Chelsea's offensive firepower is full, this game should have an advantage, the first win is preferred, the second draw.

Cologne has made a comeback in the last three rounds, and it is not easy to win 3 consecutive wins from Leverkusen, Frankfurt and Werder Bremen. Wolfsburg has played against Mönchengladbach, Schalke 04 and Bayern Munich in the last three rounds, and achieved a record of 1 win, 1 draw and 1 loss. In this game, no one can afford to make it clear to both sides. It can be seen that the attitude of the organization is that it is difficult for the two sides to win. Therefore, the draw will be our first choice.

Mainz's performance this season has been very ups and downs. The team did not have a draw after 17 rounds, and all of them lost. There have been recent wins over Hoffenheim and Werder Bremen, as well as a disastrous defeat to Dortmund. Freiburg is relatively stable, but Freiburg's away game is also quite satisfactory. It should be said that both sides have opportunities, and we are optimistic that the two sides will be divided.

Augsburg recently ushered in a rebound. Only two games were counted in the last 10 rounds. Before losing to RB Leipzig, they achieved 5 wins and 1 draw. Dortmund's home and away performances this season are very different, and the away combat is exceptionally sluggish. The handicap gave Dortmund a high-water concession, and the deep handicap was very far-fetched. We think Augsburg can at least get a draw at home and win the second time.

The two teams' recent record is very bad, but Düsseldorf's recent opponents are relatively strong, the record is understandable, the last round defeat of Berlin United we are optimistic about Dusseldorf's ability to rebound. The opponent Bremen is really in a bad competitive state recently, and the team lost a lot. From a fundamental point of view, we more recognize the ability of the home team to take all three points, but it is unreasonable to give the home team a high water mark. Therefore, from the perspective of the game, we choose to draw Werder Bremen.

Hoffenheim has recently won 2 games in a row, but previously had a 1 draw and 3 losses, especially in the case of an extra one and a 1-5 defeat to Mainz. The lack of stability of the team is worrying. Frankfurt has recently been in a doldrums. The team has been unbeaten in 7 rounds in the league and has only achieved 1 draw and 6 losses. However, the handicap concession given by Hoffenheim to the half-high water was very unreasonable. Frankfurt's recent situation is so poor. The home team made very shallow and the upper plate was a high water.

Sassuolo's recent problems are not small. In the last two rounds against Genoa and Udinese, both ended with losses, and the team's defensive end fell into a doldrums. Turin had two consecutive victories against Rome and Bologna. The gold content was not low. The game agency also more recognized the prospect of Turin's win in the game. The hand gave Turin a tie in the water. We think the visiting team will be undefeated. We chose the tie in Turin to win.

After Gattuso took office, Naples only won the team of Sassuolo. Naples still did not have an advantage when facing a strong enemy, and the team's tactics did not improve significantly. However, the state of Florence is also very depressed. In addition to a 1-0 victory over Ferrara in the previous round of the league, Florence's recent record of 3 draws and 7 losses was dismal. We don't think Naples will at least lose in this game, maybe the draw will be be tter, but the main victory cannot be completely ruled out. 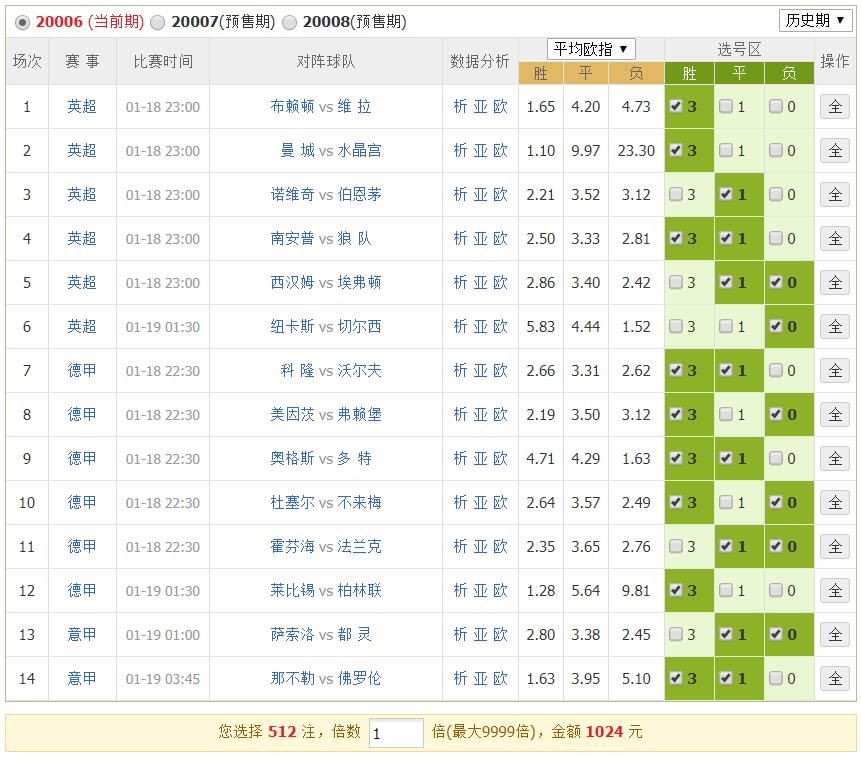 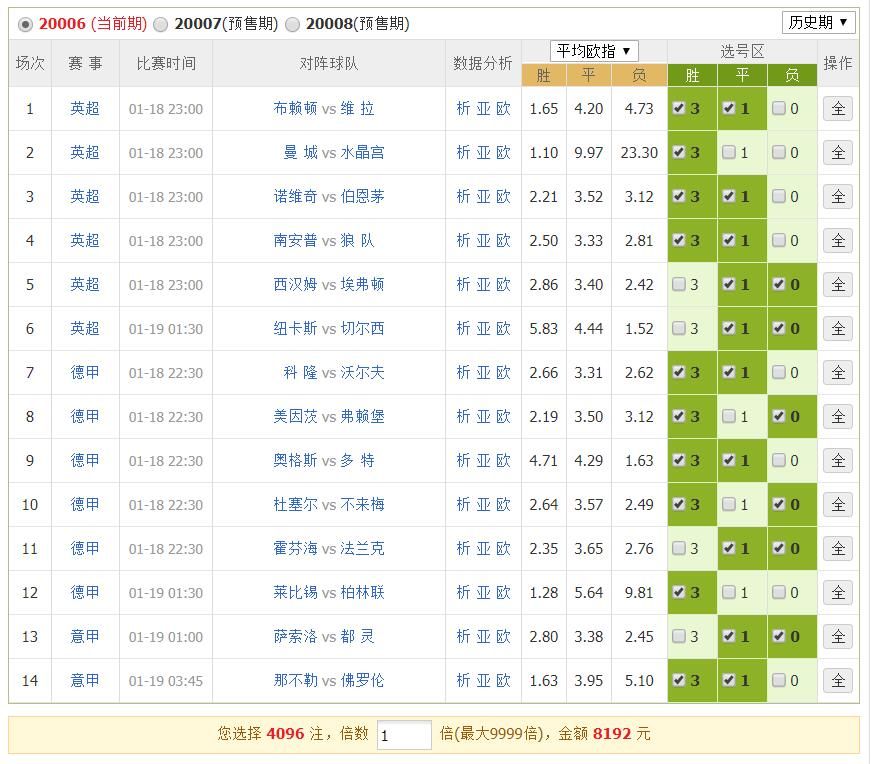